The Revell 1:76 Challenger 1 is a re-boxing of an old Matchbox offering of the Challenger.

Apart from adding the aerials to the tank plus some static grass to the base, the kit was built straight out of the box.

Supplied on 3 runners and with rubber band style tracks. There are decals for 2 vehicles:

The second option is not very descriptive as to which tank it actually represents.

Construction starts with the wheels and preparing the lower hull and the rear f the hull.

No real issues at this stage of the build, all parts fit well.

While waiting for the wheels and lower hull sections to set, I made a start on the upper hull and turret.

Used a small pin vice to drill out the end of the gun barrel. I also glued the gun barrel in place. It’s not like I’m going to be moving that part inn the future.

Again, no issues with the assembly at this stage. Except I managed to lose the pickaxe head, so this did not get added to the tank.

Next step was to prime the wheels and lower hull with Vallejo grey surface primer (74.601).

As a side note, I own 2 airbrushes, a cheap Abest 0.2mm airbrush, and a Harder & Steenbeck Ultra. The H&S Ultra came with 0.2mm and 0.4mm needles and nozzles.

I tend to use the cheap Abest airbrush for doing priming and varnish coats and the Ultra for more detailed work.

You’ll see in the photo, that the plan was to use Tamiya XF81 Dark Green 2 (RAF) as the main colour for the colour scheme.

To my eyes, this green just did not look right. It does not really show in this photo, but for me it was a little too light in colour.

So after a bit of umming and ahhing, I decided to re-paint the lower hull and wheels with Tamiya XF 61 Dark Green.

To me this just seemed a better green for a BAOR vehicle. Possibly a little too dark, but after doing a bit quick of Google searching, it would appear that the green could vary quite a bit with BAOR equipment!

Wheel rims painted black and gluing them to the lower hull starts.

Simple fix, was to drill out a hole in the wheel hub and the connection on the hull for the wheel. Then using a small section of paper-clip as a pin between the two items.

This gave a very strong join, much better than the original plastic pin.

Time to attach the upper hull to the lower hull.

Was a good fit except for a slight gap at the front. Nothing a small amount of Vallejo Plastic Putty couldn’t fix.

The side skirts were quite fiddly to attach, not sure I really got them as flush as I would have liked.

Next step as to paint the black part of the distinctive but simple BAOR camouflage scheme.

The kit was then given a coat of Vallejo Satin Acrylic Varnish 26.519 ready for decals.

Once the decals had been applied, another coat of satin varnish was applied to protect them.

Also used a dry-brush technique and Tamiya XF52 Flat Earth to add some mud splatter on the side skirts.

Aerials were made from 5amp fuse wire. Then the kit was given a couple of coats of Vallejo Polyurethane Matt Varnish 26.651.

Of course we can’t forget the base.

Sprayed various greens, browns, blacks and greys to get an earth look. Then added some static grass. I don’t own a static grass applicator, so I just generally use an old paint brush to try and make the grass stand up. Not always a great success! 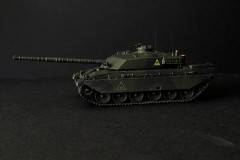 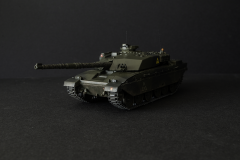 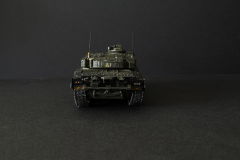 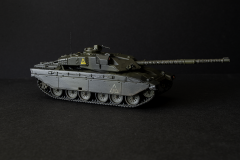 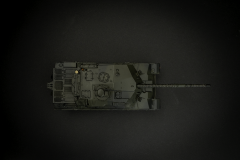 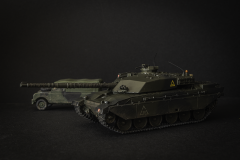 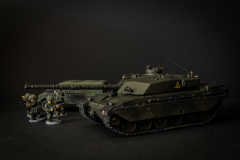 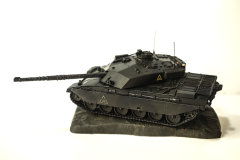 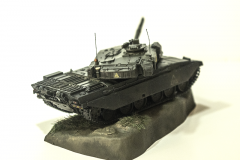