A follow on BLOG post from the Airfix 1:72 NATO Ground Crew review, a look at the Italeri 1:72 NATO Pilots and Ground Crew equivalent set.

Esci originally released the set sometime in the 1980’s. Re-boxed by Italeri in 2004.

Contents of the Italeri 1:72 NATO Pilots and Ground Crew

Moulded in soft blue/grey plastic. The detail looks quite good, but there is quite a lot of flash.

I wish Esci/Italeri had not had the sprue connected to the figures heads, as this makes it very awkward to remove them. Due to this flash and the sprue attachment, a very sharp craft knife will be required.

A good selection of poses and dress states are included in the set.

Break down of the figures from the Italeri 1:72 NATO Pilots and Ground Crew set

Packing his ‘six shooter’ this pilot figure could fit in well with a Vietnam era USAF aircraft.

This one looks like a Navy Aviator, possibly wearing an emersion suit? Not sure which nation he is from. At 1:72 when painted he will look like a generic NATO pilot.

Appears to be wearing the same flight suit as Pilot 2 (above). Looks like he can be posed holding a cockpit entry ladder.

I like this pose, something a bit different. Pilot waiting to chat to his crew chief about something on his maintenance log. Or just getting his navigation/flight papers together.

OK, this has to be Robin Olds, and he needs an F-4 Phantom to be posed next to! Another very nice pose and figure, but there can only be 1 Robin Olds!

This one screams USN/USMC topless carrier crew! Photo also includes how bad the sprue attachment is on the head.

Another topless ground crew. Again would fit very well with USN/USMC carrier scene. This figure and the one above should stretch your flesh painting skills at 1:72.

At first I thought this guy was saluting with the wrong hand. But if it is a salute it’s a very sloppy one! So your guess is as good as mine as to what he is supposed to be doing. Could also be used as army, as he appears to be wearing t-shirt and combats.

This kneeling figure would fit in well in any diorama requiring ground crew or mechanic working on anything really. So a very simple and useful figure.

Useful looking radio operator, would not look out of place on an airfield diorama.

Just finished wiping down the cockpit canopy and standing back admiring his work. He appears to be wearing a tabard, so could work as Air Force, Navy or Marines ground/deck crew.

Due to his head gear this one looks US Navy/Marines to me. But what is he holding in his right hand. It’s an odd shape for a flashlight and not the right shape for a CAM. Plus if it was CAM he would be in NBC kit?

More flight deck crew? He appears to be directing or marshalling an aircraft.

This one for me is distinctly carrier deck crew! Quite a dynamic pose for this set.

Quite obvious that this one is an aircraft marshaller.

Looks like a pilot to me. But why is he squatting down with a bottle?

Kneeling ground crew in NB suit holding a tool of some description. The style of respirator is not familiar to me. Maybe the French M51 respirator. It’s not British and I’m 99% sure it’s not US. Will have to do more research.

Muffled talking and frantic pointing towards a clipboard. The joys of trying to communicate in full NBC kit! This figure would work well with the next one in the list.

Desperately trying to hear and understand what the bloke with the clipboard is trying to say!

This set is newer than the Airfix NATO Ground Crew with the details being a little more crisp. It does suffer from some flash, but then don’t all these soft plastic sets?

The range of different pilots will be very useful, especially the Vietnam era figures.

I also like that it includes carrier deck crew figures. I think these could easily be used for RN, USN and USMC dioramas.

Not so sure about the figures in NBC suits, well not until I have found out which nationality they represent.

It is a set this is certainly worth having on hand. Unlike the Airfix set, the Italeri NATO Pilots and Ground Crew is still available to buy.

This Italeri 1/72 F4U-7 Corsair is another kit picked up on Ebay, and hopefully at a decent price.

Kit went together quite well, again if any issues, then that would be down to my lack of skill. Being one colour, it was also another useful airbrushing exercise, which didn’t quite go to plan.

Anyway, on with the build photos.

Nice attractive and dramatic box art. Those Suez markings are really nice, but didn’t go for that scheme.

As with kits of this age, not many decals, just the main ones. Register etc., all looked good, so was happy to use them.

The Italeri 1/72 F4U-7 Corsair kit contents, as you see, not too much to put together.

Construction started, using a mix of Hataka and Vallejo paints.

Checking seam lines with black paint. Took a while to get them to not show.

That seam line on the front half of the fuselage took some work to get rid of. I even made up some liquid plastic by melting bits of sprue in liquid poly glue.

Finally got it to a stage where I could give it a coat of primer. Canopy also masked, and gun barrels also cut off, to be replaced with metal wire.

Bottom with a nice coat of primer.

Because I had (for me) a success at pre-shading my earlier Spitfire build (Spitfire PR.XIX). I thought I’d give it a go on this Corsair.

Unfortunately, I was a bit heavy handed with spraying the Vallejo 71.295 USN Sea Blue so lost all the pre-shading that I did. Still getting to grips with airbrushing, knowing when to stop seems to be the problem. 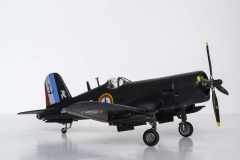 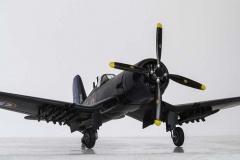 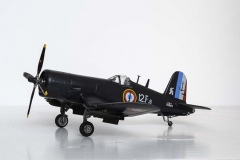 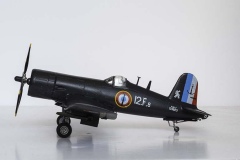 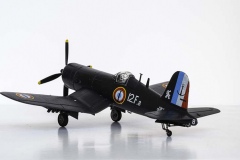 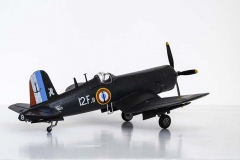 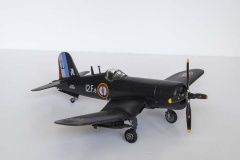 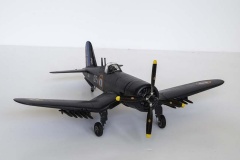 During this build I used a number of products, that you also may find useful. To start with, fillers are something every model maker requires, and the 2 that I find the best are Vallejo Plastic Putty and Standard Milliput Yellow-Grey.

For masking I use Tamiya 10mm tape and Tamiya 3mm tape plus when reuired standard decorating tape. I always, well nearly always, take some of the stickiness from the tape by sticking it to my trousers before applying to the models painted surface. Another masking product that I use is the Vallejo Liquid Mask.

The USN Sea Blue was Vallejo 71.295 , which sprayed quite well. The interior green was from the Hataka RAF in Africa acrylic paint set (AS08). I’ve had mixed results when spraying Hataka paints, but that may be more down to my ineperience.

This is my first post in my model making blog. This will be a record of my journey of getting back in to model making.

When I was younger I used to build quite a few model kits, aircraft, AFV’s and figures. Then life happened and I stopped making model kits. Over the years I would look at models in shops and even got one or two. However I never really made a effort to re-start the hobby.

Well last year I did start again, and boy have things changed! Thought my old “skill” would suffice, yeah….no! So it is basically re-learning new skills, which is a bit frustrating at times, but great fun.

As this is an Cold War themed website, I will only chat about my Cold War builds, this may also include vehicles and figures, but the majority will be aircraft.

Talking of funds, I’m a member of the Amazon Associates scheme, so I will be linking useful items to the Amazon site, if you buy after clicking on the link, I get a small commission from Amazon.

Oh, must also mention, that not only am I trying to improve my building skills, I decided I’d also start using an airbrush!

Well I hope you join me on this journey, I’m always happy to receive constructive criticism.

If you are on Scalemates.com and want to connect, my nick name is JOTCW.