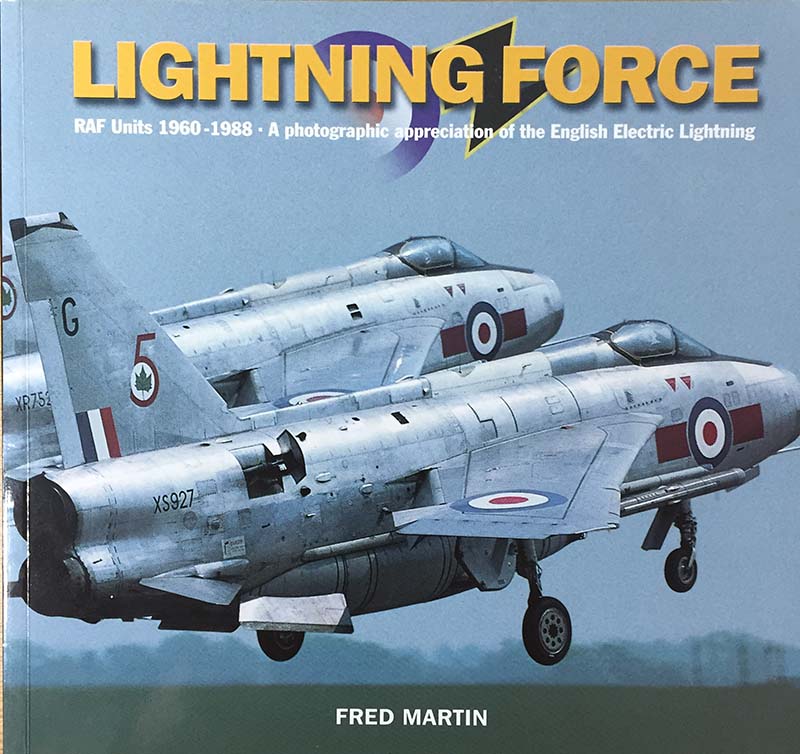 Lightning Force by Fred Martin is a highly illustrated (photos) book featuring the English Electric Lightning in service with the Royal Air Force.

Lightning Force: RAF Units 1960-1988 – A Photographic Appreciation of the English Electric Lightning is a book that gets right to the core of its subject, and lists each Squadron that used the Lighting, and also each version that the Squadron used. It is in a fairly large format 25x24cm, so small enough to hold, but big enough to include good size photographs.

Contents include a brief Introduction, and then stright in to the Squadrons. Each Squadron gets a small write up about the Lightning in squadron use, a small table that details the aircraft used immediatley prior to Lightning use, versions of Lightnings operated, bases operated from, when disbanded, what happened after Lightinings (Later), and a description of the squadron badge. Also included is an image of the squadron badge and squadron colours used on the Lightning.

What then follows is 4 to 6 pages of photos of Lightnings from that particular squadron.

The final chapter, deals with training and second line units.

Lots and lots of great photographs of the EE Lightning, mostly in colour and of quite good to high quality. Writing is kept to a minimum as the photographs do the talking in this book.

But you will find that the captions to the photos are detailed and useful. I also like the format of the book, in that it presents the Lightnings per squadron and not by Lightning version. Another plus is the amount of colour, in the squadron badges and markings, plus in the photographs.

Not really an issue for me, but if you are looking for a ‘walk around’ type book, then this is not one. Another very slight issue is the paper. It is good quality, but it would have lifted the book to a higher level if it was glossier.

Would I recommend Lightning Force: RAF Units 1960-1988 – A Photographic Appreciation of the English Electric Lightning ? very much so. I feel it is a great resource for Lightning photos and information on RAF Squadron use of the Lightning.

This is a ‘visual’ book that can be used to just flick through, or to wet the appetite for a modelling or painting projects.

More information about the EE Lightning.

If you would like more info about the EE Lightning, then you can find more on my EE Lightning page.