As part of the “London Protocol” agreed in 1944, Berlin was divided in to 4 sectors, each sector under allied control (USA, USSR, GB and France).

However, Berlin was located deep inside the Soviet controlled East Germany, and therefore in a position to be blocked by land.

The start of the journey towards the blockade began in January 1947, when the British and Americans combined their 2 separate zones in West Germany, to become the Bizone (France then merged their zone in April 1949, to become the Trizone).

The Soviet Union had no desire to see a strong Germany, as was agreed at the August 1945 Potsdam Agreement. So at this stage, differences between the former allies on the future of Germany were starting to appear.

In March of 1947 US President Truman, announced his “Truman Doctrine“, aid to any country that wanted help to contain communism. This was in response to Soviet meddling in Greece and Turkey.

March 1948, and the US Congress vote for the Marshall Aid plan (an initiative to aid Western Europe in economic recovery), which was perceived by the Soviet Union as an attempt to undermine their influence in Eastern Europe.

1 June 1948, America and Britain announced that they wanted to see the Bizone become West Germany.

23 June 1948, America and Britain, introduce a new currency (the Deutsche mark) into the Bizone and West Berlin.

24 June 1948, the Soviet Union closes all road and rail traffic in West Berlin between the British, US and French zones and from western Germany.

The British started the airlift with Operation “Knicker”, 28 June, to supply the British Garrison. But it soon became apparent that the wider Berlin population also required supplies.

The unofficial name for the Berlin airlift from the Americans, was operation “Vittles”.

The Aircraft (images not to scale) 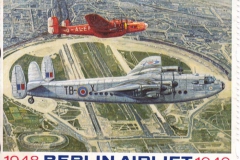