I first came across the “Beagle” when I was a young boy and a very keen builder of Airfix model kits. It was the images in the Airfix Magazines of this kit that always fascinated me. Unfortunately, my pocket money could only ever stretch to a Series 1 kit, and the Beagle was (if I remember correctly) a Series 4.

With a crew of 3 (pilot, navigator/bombardier and rear gunner), deliveries to the Soviet airforce started in early 1950.

The Il-28 has seen combat in the Middle East during the Arab-Isreali wars, Vietnam, Afghanistan, Nigeria and the Yemen.

Also licence built by Czechoslovakia as the B-28. Plus copied by China as various types of H-5 (exported as B5).

Withdrawn from the Soviet Airforce in the 1980s, however, many continue to be operated to date (December 2014), specifically by North Korea. 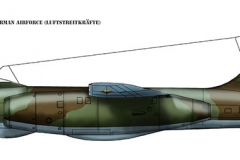